(August 26, 2009) – Toronto’s Muslims are being asked to help local families in need during Ramadan by sponsoring ‘Iftaar Baskets’ through the Project Ramadan initiative.

Project Ramadan is being organized by the MPR Community Group in conjunction with the Muslim Welfare Centre.

“These baskets are equipped with a month’s worth of ingredients that will help one family of 4 to 5 people create its own Iftaar (a meal with which the family can break their fast) for a period of month,” Ayesha Syed-Rashid of Project Ramadan Team told Iqra.ca.

With the donations received, Project Ramadan will create food baskets and donate them to the Muslim Welfare Centre in Toronto for distribution to needy families.

“Our goal is to get the community involved in supporting families-in-need during this holy month of Ramadan,” Syed-Rashid said. “We want to create an outlet for people to “do good” during this month.”

The MPR Community Group was formed three years ago by a group of volunteers who share the common goals of creating social awareness and instigating positive reform in the Muslim community.

Their first community event was titled ‘Discover T-Dot’ and raised over $5,000 for the Second Harvest and Daily Bread food bank.

The group is hoping that Project Ramadan will also create awareness on poverty issues around the GTA.

There are 6,000 families accessing the services of the Muslim Welfare Centre in the Greater Toronto Area and the Peel on a monthly basis.

Marketing of the Project Ramadan initiative is underway at Greater Toronto Area mosques and at various Ramadan events.

The group is expecting to distribute approximately 175 to 200 ‘Iftaar baskets’ based on the responses received to date. 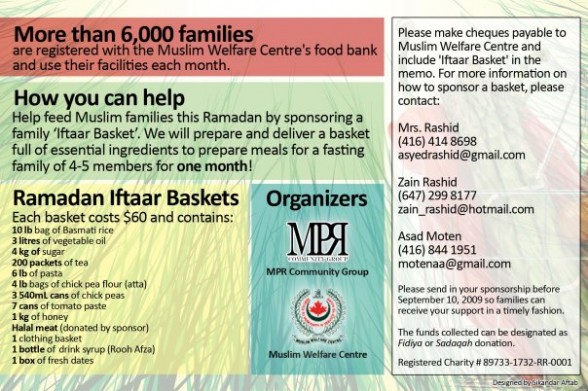