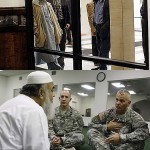 (November 14, 2009) – In the immediate aftermath of the 5 November Fort Hood killings, some media commentators, alerted by gunman Major Dr. Nidal Malik Hasan’s Muslim name, immediately described the murders as a manifestation of his religious beliefs, reinforcing many Americans’ fears about Islam. In a moment like this one, the topic of religious freedom might be one we wish to avoid, but protecting it is essential to preventing another such tragedy. All Americans–both Muslims and non-Muslims–now have a role to play in ensuring that the country moves forward productively and peacefully.

Soon after the attack, Muslim American individuals and organisations, such as Dr. Ingrid Mattson, president of the Islamic Society of North America (ISNA), the Muslim Public Affairs Council (MPAC) and the Council of American-Islamic Relations (CAIR), responded by unequivocally condemning the murders as reprehensible and outside the domain of Islam.

According to CAIR, “No political or religious ideology could ever justify or excuse such wanton and indiscriminate violence. The attack was particularly heinous in that it targeted the all-volunteer army that protects our nation. We Muslim Americans stand with our fellow citizens in offering both prayers for the victims and sincere condolences to the families of those killed or injured.”

The attack has spurred Muslim organisations to urge non-Muslims to refrain from viewing the incident through the prism of religion.

As facts continue to emerge, it appears that Hasan’s actions may be rooted in causes other than religion, including mental illness. Yet the Muslim element cannot be dismissed. For example, National Public Radio recently reported that during Grand Rounds, a regular session where doctors present on a medical topic, Hasan used his presentation slot a few years ago to give a lecture on the Qur’an, describing for the group a litany of tortures that he said awaited unbelievers in hell. And six months ago, several postings about suicide bombings surfaced on the Internet under Hasan’s name. Investigators are still looking into whether they are attributable to him.

Muslim Americans have the duty to protect the vulnerable among them–including Muslim servicemen–from those who preach extremism and violence. Muslim Americans must proactively seek out and get professional help for their co-religionists who have violent views and demonstrate suspicious or distressed behaviour before such tragic incidents occur.

Along with the Muslim response to Fort Hood, a broader American response is also necessary. In the aftermath of the shooting, the government may be inclined to view Muslim Americans in the military with greater suspicion, making Muslim military personnel more reluctant to open up about their faith. While it may be necessary to regulate speech at fora such as Grand Rounds, which is intended for medical rather than religious presentations, it is important to protect religious speech in private conversations between government employees, regardless of their religious background.

In fact, free and open religious discourse among employees can not only increase understanding, but may also make it easier to detect and counter extremist rhetoric and to report any suspicious behaviours or attitudes to the appropriate authorities. Only when religious speech is treated as a normal part of human discourse can individuals engage in it comfortably rather than avoiding it as politically incorrect–and, in the process, overlooking critical red flags.

In the wake of the Fort Hood tragedy, it is important to focus on preventative measures. Muslim Americans have a special duty to protect their co-religionists from falling prey to radicalism, while all Americans–Muslim and non-Muslim alike–must work toward fostering an environment where religious freedom is not only protected but also used as a tool against violent extremism.

* Asma T. Uddin is an international legal fellow at The Becket Fund for Religious Liberty and editor-in-chief of altmuslimah.com. This article was written for the Common Ground News Service (CGNews).