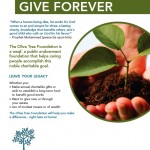 (June 10, 2009) – Olive Tree Foundation has announced that it will provide a grant to support the Tessellate Institute in developing oral histories of the first mosque in Toronto.

“The Olive Tree Foundation is very pleased to be able fund this inaugural project of the Tessellate Institute,” said Muneeb Nasir, President of the Foundation, in announcing the grant. “Muslims are often depicted in mainstream Canadian media as outsiders and this project will show the early contributions of the community.”

The Tessellate Institute’s project, ‘Mosque One: Oral Histories of Toronto’s First Mosque’, which is co-sponsored by the International Development and Relief Foundation (IDRF), will conduct interviews with Muslims connected to the founding of the first mosque in Toronto, which was established in 1961 at a site on Dundas St.  The project will also compile photographic, textual, newspaper or court documents that relate to the mosque.

”This project will foster better understanding, relations and even integration between Canadian Muslims and other communities,” said Dr. Katherine Bullock, Director of the Tessellate Institute. “There is a need to anchor and document the civic history of Muslims in the Canadian mosaic.”

The project is the first in a proposed series that will document Muslims’ narratives as part of the Canadian social fabric.  The information will be promoted and made available through a multimedia website that will provide open access to this research.

The Tessellate Institute (TTI) was incorporated as a federal not-for-profit corporation in 2007 to provide Canadian policymakers and the general public academically-rigorous research about policy relevant issues, particularly on topics pertaining to ethnic and religious minorities.

The Olive Tree Foundation is a philanthropic foundation that promotes community development through the collection of endowed funds and charitable contributions to fund services for the long-term benefit of the community.