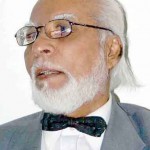 Ali, who was also the president of the Canadian Society of Muslims, notably spearheaded the movement to allow in Ontario the practice of Shariah law.

He was educated at several universities.

His first university was Osmania in Hyderabad Deccan, India.

Back in the days when he attended it, (the 1940s) Osmania was a prestigious University to attend in India.

There he studied under such notables as Maulana Manazir Ahsan Gilani and other prominent scholars such as Beoband and Nadwa as well as Dr. M. Hamidullah.

He received a BA in theology and also an LL.B. in Muslim Law from Osmania.

He had received various scholarships as well in those studies.

Some of the subjects he studied were: the Qur’an (exegesis), Hadith, Usul, Fiqh, Kalam, Logic, Arabic, as well as other Arts subjects.

Due to the tumultuous conditions from the unfortunate takeover of Hyderabad by India, and under self-imposed exile, he travelled to Pakistan where he practiced law as an Advocate for five years.

Then he travelled to London, England where he studied at the University of London. There he completed the courses for an LL.M. in Muslim Law and also courses as a Chartered Secretary.

Upon completing the Bar Admission course at Osgoode Hall, he was called to the Bar in 1962. 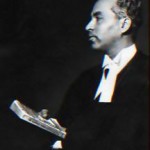 He was the first immigrant from India/Pakistan in Canada to have taken his legal oath on the Holy Qur’an, as opposed to the Bible.

This created quite a fuss at the time.

His whole life has been law, not only as a scholar in Muslim Law, but he is also educated in Western secular law too.

People who know him see that he is a lawyer through and through – both secular and religious.

In 1962-3 he met Dr. M. Qadeer Baig and a long and fruitful relationship with him.

Under Dr. Baig’s directorship, Syed Mumtaz Ali was instrumental in the incorporation of The Canadian Society of Muslims and two other sister corporations: International Institute of Islamic Studies and Research, and The Society for Understanding the Finite and the Infinite.

It was around that time that the successful textbook campaign to eliminate the bias and prejudice from Ontario’s textbooks was started and the Jami Mosque of Toronto was set up by Dr. Baig.

He practiced corporate law for over 25 years with the Ontario government before his retirement in 1990.

He is survived by his wife of 43 years, his son and a daughter.