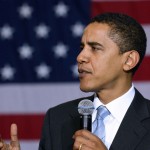 (June 2, 2009) – President Barack Obama will be speaking about the relationship between the United States and Muslims at the University of Cairo in Egypt on Thursday, June 4.

On his way to Cairo, the president will stop Wednesday in Saudi Arabia, where he’ll meet in Riyadh with Saudi King Abdullah

The Cairo speech is being billed as an address to the Muslim world.

“The speech will outline his personal commitment to engagement, based upon mutual interests and mutual respect. He will discuss how the United States and Muslim communities around the world can bridge some of the differences that have divided them.

“He will review particular issues of concern, such as violent extremism and the Israeli-Palestinian conflict. And he will discuss new areas for partnership going forward that serve the mutual interests of our people.”

Madeleine K. Albright, the U.S. secretary of state from 1997 to 2001, writes in the Op-ed section of the New York Times (Obama’s Muslim Speech, June 2 2009) that the President speech should also be addressing Americans who need to learn more about Muslims:

“Although the president will be speaking to a Muslim audience about American policy, it is equally important that he address the audience in the United States. Muslims abroad need to embrace a more accurate picture of America; but Americans need to learn more about Muslims. It cannot be said too often that Islam is a religion of peace, that terrorism is as indefensible in Islam as it is in the other two Abrahamic faiths, and that the vast majority of Muslims — including the millions who are citizens of the United States — want to live in dignity and without violence.”

Meanwhile, Saad Eddin Ibrahim, the Egyptian human rights advocate who was imprisoned by the Hosni Mubarak regime and is now in exile and a visiting professor at Harvard, writes in the Wall Street Journal (Egypt Needs Democracy and Term Limits, June 2 2009) that President needs to go beyond rhetoric and promote change:

“Let’s hope that whatever else he may have pressing — Palestine, Iran, Iraq and Afghanistan — Mr. Obama will try to be that change agent. One remarkable thing he can do for Egypt and the rest of the Muslim world is to offer American help in making governance more sound. He should promote the rule of law by promoting democratic elections and term limits for democratically elected presidents.

This may appear to be long shot. Mr. Obama’s advisers will likely argue against it to avoid offending his host. But such a bold move would win him the hearts and minds of the world’s 1.4 billion Muslims forever. With his legendary gift for communication, Mr. Obama should find a way to propose the idea and offer a Marshall-like plan of financial incentives. He can then call on Egyptians and other Muslims to do the rest.”

Muslims will be looking for President Obama to move beyond the high rhetoric to tell them how he plans to improve relations.