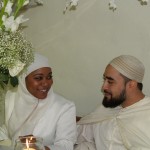 (June 3, 2009) – It is hip-hop as you have probably never heard it. This new film, which opens the 22nd season of P.O.V., PBS’s award-winning nonfiction film series, gives audiences an insider’s view of a little-known cultural fusion between Muslims and street beats that has been developing since the very beginnings of hip-hop culture.

The result is a surprising challenge to stereotypes of both Muslims and urban youth in America that encourages viewers to look critically at the “clash of civilizations” between Islam and the West.

New Muslim Cool is more than another hybrid hip-hop story.

It’s also the story of a man coming of age, facing his deepest questions about his faith, trying to keep his family safe and learning how to hold himself accountable.

A decade ago, Hamza Pérez, born Jason, was a drug dealer on America’s mean streets.

The child of Puerto Rican parents, he had two recurring, competing dreams at night: in one he was in prison by age 21, and in the other he was dead. New Muslim Cool is the story of how, as Hamza laughingly puts it, “both [dreams] came true,” albeit in unpredictable ways.

Indeed, when Hamza was 21, he was hanging out with friends and getting high when a chance encounter with an “old sheikh” transformed his life. The death he experienced was “a death of all my past, the negative,” he says.

He gave up drugs and the street life and converted to Islam. He then went further, becoming active in forming a community of Latino and African-American Muslims, many of whom, like Hamza, were former street hustlers and drug dealers.

The community ultimately moved from Massachusetts to Pittsburgh, Pa., with Hamza bringing along his son and, after the breakup of his first marriage, his daughter.

As part of their efforts to build a community that would reconcile their heritage with their new faith, Hamza and his brother, Sulíman, formed the rap group Mujahideen Team (M-Team).

M-Team strives to use knowledge gained in the streets to put Islam’s religious message into a familiar context.

Ultimately, Hamza would bring that message to prisons, fulfilling his other dream in a way he had never imagined.

Early on in the film, Hamza and Sulíman joke about the exotic hybridization their faith and community embody.

The two men’s conversion has largely bewildered their family, who raised them as Roman Catholics.

The family’s initial upset has been tempered by gratitude that the brothers’ new faith has gotten them off drugs and away from other dangerous pursuits.

Yet the family also feels some discomfort over the tough lyrics Hamza and Sulíman use as M-Team.

With their unflinchingly critical words and intense stage performance — complete with flaming machetes — Hamza and Sulíman attempt to carve out a place for themselves in the tradition of protest poetry, up from the rawest roots of hip-hop. Within the Muslim hip-hop world, they are recognized as heirs to the tradition of artists like the Last Poets and Public Enemy, freely criticizing the government and many elements of modern society. But their music also draws scrutiny and eventually complicates Hamza’s life, even as he begins to grow and embrace a softer way of expressing himself.

The struggle to make his community thrive, raise his kids, build a new marriage and, paradoxically, deal with an FBI investigation of his group’s new mosque in Pittsburgh, Pa., all serve to deepen Hamza’s study of and thinking about Islam and the plight of the poor and imprisoned in America.

Hamza begins to reach out to prisoners, using his faith and struggles to inspire them.

His work also leads him into surprising alliances with ministries of other religions that, like his own, seek to build a road to redemption from the nation’s jails.

Says director/producer Jennifer Maytorena Taylor, “New Muslim Cool came out of my long-standing interest in the power of pop music and culture to create social change and a deep feeling that we urgently need to look for common ground as our world grows increasingly diverse and interconnected. This is a story about who we all are as a country, making choices about our deepest values in tough times and continually redefining what it means to be American.”