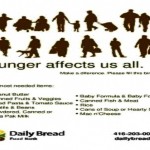 (August 8, 2009) – The Muslim Students Association at the University of Toronto (St. George) is teaming up with Masjid Toronto and the Thaqalayn Muslim Association (UofT) to collect food in the upcoming month of Ramadan to donate to Daily Bread Food Bank.

Ramadan, the Muslim month of fasting, is scheduled to begin on August 22.

“While we will end our fasts every night with large meals, together with our families and friends, many in Toronto and throughout the world will go on, hungry and alone,” according to the MSA poster.

Donors will be able to drop off non-perishable food items at various locations on campus, as well as Masjid Toronto at Dundas and Chestnut Streets.

Meanwhile, MuslimServ has launched it annual Ramadan Chicken Campaign to collect donations to purchase halal chicken that will be delivered to Toronto’s Daily Bread Food Bank.

MuslimServ is a Canadian Registered Charity engaged in service based projects such as feeding the poor.

“We are geared up and ready for Ramadan Chicken campaign,” according to the MuslimServ web site.

“We will deliver halal chicken to the Food Bank on weekly basis, so that it is consumed during the month of Ramadan.”

Last year, the charity delivered 14,000 lbs of halal chicken to the Food Bank.

Further information on MuslimServ’s Ramadan Chicken Campaign can be found at: www.MuslimServ.com