On Friday February 20 at the University of Toronto Medical Science Building, a group of aspiring doctors being interviewed for a position in the medical class of 2013, were expounding on their commitment to help others. 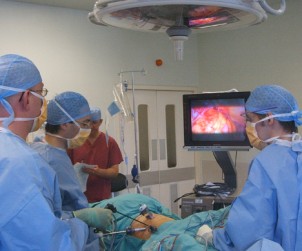 At the same time and not too far away, a group of medical students weremaking good on these very societal obligations as they prepared almost 200 lunches for distribution to homeless shelters throughout the downtown core.

This project, created by the Muslim Medical Student Association (MMSA) at the University of Toronto and supported with funds from the U of T Medical Society, included students from all faiths, ethnic backgrounds and years of training.

The purpose of the annual “Sandwich-Run” is to raise awareness of the growing problem of homelessness and hunger in Toronto and is one of anumber of community initiatives taken on by the MMSA.

Some of the group’s other events include a Fast-A-Thon to raise money for Canadian Feed the Children (CFC), where people of all faiths fast for one day during Ramadan and donate their lunch money to the CFC; and supporting the Orphan Sponsorship Program of the U of T Muslim Students Association, which helps abandoned children in developing countries.

According to MMSA president Tarek Abd El Halim, “…advocacy [is] one ofthe most important roles of being a competent physician … [it] goes hand in hand with being both a doctor and a citizen.”

Here are some key facts that all Canadians living in large urban centresshould know:

Here is what Canadians and their governments can do:
* Increase social assistance support funding.
* Increase the availability of affordable housing.
* Improve access to health cards and health care.
* Be part of the solution — wherever you are.

(Dr. Taufik A Valiante MD PhD FRCS is a neurosurgeon and neuroscientist who enjoys the outdoors and anything that makes this nation, an already great place to live, even better. Source: The Canadian Islamic Congress Friday Magazine.)