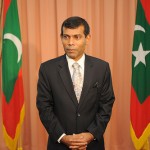 (October 23, 2009) – President Mohammed Nasheed of the Republic of Maldives, whose small island nation is existentially threatened by rising sea levels caused by climate change, has called on the world to set a target of returning the levels of CO2 in our atmosphere to 350 parts per million–the level Dr. James Hansen of NASA says we need to be below to stabilize the climate.

Nasheed also invited others to join the 350 International Day of Climate Action on October 24, 2009.

Not only has Nasheed endorsed 350, he’s personally organizing an event for the group’s International Day of Action.

He will lead a group of 350 scuba divers, including some of his cabinet ministers, in the world’s largest underwater protest on global warming.

The President makes it clear why he’s taking strong action:

“After the rapid Arctic sea ice melt in the summer of 2007, scientists realized that global warming was happening more quickly and on a larger scale than they had anticipated. Wherever they looked — high-altitude glaciers, hydrological cycles, the spread of mosquitoes — they found change happening decades ahead of schedule. In January 2008, James Hansen, one of the world’s leading climatologists, published a series of papers showing that the actual safe limit for carbon in the atmosphere was at most 350 parts per million. Anything higher than that limit, warns Hansen, could seed “irreversible, catastrophic effects” on a global scale.

We’re already above that figure — the current concentration is 390 ppm and rising. For the Maldives, climate change is no vague or distant irritation but a clear and present danger to our survival. But the Maldives is no special case; simply the canary in the world’s coal mine. Neighboring Asian countries like Bangladesh are already suffering from saltwater intrusion as seas rise; Australia and the American southwest are enduring epic drought; forests across western North America are succumbing to pests multiplying in the growing heat. And all of this is with temperature increases of nearly 1 degree — why on earth would we be aiming for 2 degrees?

Instead we need emergency action all around the world to curb emissions. It won’t be easy — to get back to 350 the world needs to wean itself off coal before 2030, and immediately end the deforestation pouring carbon in the atmosphere. Few politicians really want to tackle something that hard, but it’s not impossible. The Maldives has committed to becoming carbon neutral by 2020, using the wind and sun to power the entire nation. If that can happen in a relatively poor, developing country, it can happen anywhere. What we lack is not technology, but political will.”