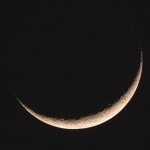 (August 20, 2009) – Starting Ramadan on the same day in North America is no longer just a community issue but it has percolated down to become a family one.

Many extended families are finding themselves in a most difficult position where family members are starting and ending the month of Ramadan on separate days because they attend different Islamic centers or subscribe to different views.

This is a pitiful state for a religious community to be in, especially one that values relationships so highly.

Indeed, it is a crisis of authority at all levels – from leaders to followers.

Will Muslims be able to start and end the month of Ramadan on one day in North America?

Occasionally, but it would not be by consensus any time soon.

It would only be as a result of circumstance – that is, if the moons align properly it may happen once in a while.

So improving this most difficult situation should be the objective of leaders and followers alike and new approaches are required.

The issue needs to be framed properly.

It is no longer about the validity of various theological positions but it is about authority in the Muslim community.

Firstly, deciding when to begin and end Ramadan and celebrate Eid is not an individual decision and any credible Imam or leader should be teaching his followers the importance of being with the congregation (jamaat).

Secondly, deciding when to begin and end Ramadan and celebrate Eid is not an individual Mosque’s decision but a community one and any Imam or leader should know this and support one of the North American bodies that have credible scholars who give Islamic rulings.

Thirdly, it is important that decisions of this sort be made in North America and not by bodies or individual scholars outside of this community and as such, however right those Imams and Mosques believe they are to follow Middle Eastern rulings, they must know that we are living here and this is our home, and working towards unifying our local community is one of their most important priorities.

Finally, keeping families together is more important than the finer legal points.

Let us all agree, followers and leaders alike, that both the Fiqh Council of North America and the Hilal Committees are both credible bodies in North America with qualified scholars who are doing their best and we should not spend our time trying to find out who is more right.

And let families come to a consensus before the major Islamic events that they will not allow themselves to be divided at these most important times of the year.