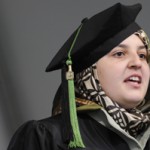 (June 29, 2009) – On June 5, Mona Minkara stood before 600 fellow members of the class of 2009 at graduation from Wellesley College and delivered the commencement address.

“It’s an honor,” said Minkara. “I hope disabled students around the country can realize you can make it even though you might be blind, or deaf, or whatever your story might be.”

A devoted Muslim who has worn the hijab head cover since sixth grade, she sometimes felt different and isolated from other schoolmates due to her blindness and minority status. But that didn’t crush her drive to succeed.

“It’s made me stronger and taught me to be who I am,” said Minkara.

At Wellesley, Minkara has served as president of Al-Muslimat, Wellesley’s Muslim student group, where she has focused on interfaith outreach.

“It gave me a chance to be a liaison with other religious groups,” Minkara said.

“It’s important to learn about each other, considering the 9/11 backlash and the awful things other Muslims have done around the world. It’s good to show that’s not what (Muslims) are all about.”

A chemistry and Middle Eastern studies double major, Monkara will continue this summer at Wellesley as a researcher with assistant professor of chemistry Mala Radhakrishnan through a grant from the Howard Hughes Medical Institute.

The daughter of Lebanese immigrants Fida El-Jamal and Samer Minkara of Hingham, Mass., Minkara spoke Arabic before learning English. Her sister Sara, who also has vision problems, has followed in her footsteps and is a junior at Wellesley.

A devoted Muslim who has worn the hijab head cover since sixth grade, she sometimes felt different and isolated from other schoolmates due to her blindness and minority status. But that didn’t crush her drive to succeed.

Since 1875, Wellesley College has been a leader in providing an excellent liberal arts education for women who will make a difference in the world. Its 500-acre campus near Boston is home to 2,300 undergraduate students from all 50 states and 68 countries.

“I hope one day I can give back to others because so many people have helped me, especially my parents,” said Minkara, whose mother strongly encouraged her to apply to Wellesley, one of the eight colleges that accepted her.