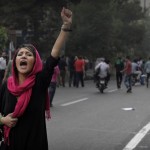 Following up from last Friday’s entry about Iran’s Presidential Election, Tehran and other cities have seen the largest street protests and rioting since the 1979 Iranian Revolution. Supporters of reform candidate Mir Hossein Mousavi, upset at their announced loss and suspicions of voter fraud, took to the streets both peacefully and, in some cases, violently to vent their frustrations. Iranian security forces and hardline volunteer militia members responded with force and arrests, attempting to stamp out the protests – meanwhile, thousands of Iranians who were happy with the election outcome staged their own victory demonstrations à See the BIG PICTURE at Boston.com