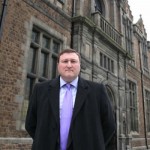 True to his growing reputation, he gave a remarkable lecture entitled “Islamic Solutions for the Global Financial Crisis” based on the startling and accurate predictions detailed in his book, “The Final Crash: Addictive Debt and Deformation of the World Economy” (Pendula Press, 2007).

She highlighted the importance of Parliament’s 2007 proclamation of October as Islamic History Month and invited the audience to celebrate Islam’s fundamental contributions to Western civilization in every field of human endeavour.

She encouraged Muslims to remain active contributors to society, as taught in the Qur’an and pointed out that Canadian history is still largely unwritten, for we are a comparatively young country; our history is still in-the-making and thus Canadian Muslims have much to contribute.

Toby Birch’s lecture was characterized by a well-paced rhythm, along with numerous examples and analogies.

He started out by analyzing the main historical, social and political factors that have led us to the current economic situation and went on to explain that Islamic Financing is a viable alternative to the traditional economic model.

He exposed in detail the pitfalls and advantages that this system offers, and outlined ways in which it is being implemented.

His talk included a discussion of ethical and social behavior in economic strategies, with examples of how Islamic finance presents a solid alternative to our present chaos of interest and debts.

The underpinning of Islamic Financing is its interest-free system, which shares risks and rewards among all participants, thus avoiding the pitfalls inherent in current fractional banking systems.

Dr. Birch’s presentation was followed by a very lively and engaging discussion with his audience. It was remarkable how much knowledge was shared by the public and the quality of the questions that arose.

The evening ended with Mrs. Valiante’s recognition of the volunteers whose efforts had contributed so much to the evening’s success.

And she extended special thanks to the event’s sponsor, The Islamic Development Bank, who provided funds to bring Mr. Birch to Canada for his extended speaking tour (please visit www.islamichistorymonth.com for upcoming dates and locations).

Toby Birch’s lecture resulted in a very interesting and engaging experience, enjoyed by both audience and the speaker.

Fortunately Islamic History Month Canada is an ongoing celebration with more upcoming events that promise to be educational and informative for Muslims and non-Muslims alike.

(Source: CIC Friday Magazine. Cristina Valiante is neurosurgeon from Spain and is currently a neurosurgical fellow at the University of Toronto. She has a clinical and scientific interest in deep brain stimulation for functional disorders of the brain and a specific interest in surgically amenable psychiatric disorders.)