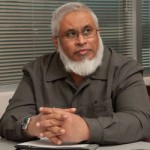 (Sermon delivered at the Anglican Church of the Transfiguration in Toronto, during the church’s Second Annual Interfaith Evensong organized by the Neighbourhood Interfaith Group on October 18, 2009).

In the name of God, Most Gracious, Most Merciful

Praised be to God, who has given me this privilege and honour to stand here today to share the Words of God, the God of Abraham, Moses, Jesus & Mohamed (Peace be on them all).

I am here as a member of the family of our Patriarch Abraham, to speak to my family members about the state of the erosion of human values. We are witnessing an era of turmoil and conflicts compounded by diseases that are threatening the lives of millions on earth. Neither accelerated medical research nor unprecedented developments in technology, neither billions of dollars spent on weapons nor fervent messages of peace are bringing comfort, peace and harmony to this world.

The 20th century has been described as the bloodiest century of this age and the first decade of the 21st century has been a continuation of the same. We are witnessing a violent World, a grim reminder of the ancient past, where human life had no value.

As people of Abrahamic faith, Jewish, Christians and Muslims, we need to pause for a moment and reflect on the message of Abraham and seek guidance. The Divine message we find in the Quran as follows:

Those with faith, those who are Jews, and the Christians and Sabaeans, all who believe in God and the Last Day and act rightly, will have their reward with their Lord. They will feel no fear and will know no sorrow. (2:62)

Those who believe and those who are Jews and the Sabaeans and the Christians, all who believe in God and the Last Day and act rightly will feel no fear and will know no sorrow. (5:69)

Abraham was neither a Jew nor a Christian, but a man of pure natural belief- One who submitted to the Lord. He was not one of the idolaters. (3:67)

If God had not driven some people back by means of others, monasteries, churches, synagogues and mosques, where God’s name is mentioned much, would have been pulled down and destroyed. God will certainly help those who help Him-God is All-Strong, Almighty. (22:40)

These Divine messages exhort us to understand our unity as a family and together we need to see the World with the same lense as the Messengers of God did (Peace be on them all) and value their mission for connecting humanity with the Creator.

There is a big disconnect between God and His creation. By limiting Divine presence and influence to four walls of the house, in the name of secularism, – by removing God from all public spheres, society is degenerating into immoral, social chaos.

We need to bring God back in our life. We are witnessing a sudden rise in natural disasters around the World. There have been more than 30 major Earthquakes (loss of lives exceeded 1000), in the last 20 years. Powerful Tornadoes ravaged many parts of North America in the last ten years. Volcanic eruptions in different parts of the World, even from the dormant volcanoes, have been occurring frequently. And lastly the floods in many parts of the World devastated many agricultural lands and localities.

Some people of faith will see these as acts of punishment for our transgression of His commands, so that we may heed to His warnings. We find humanity has drifted away from the Creator and this has given rise to unprecedented levels of arrogance, transgression and rejection of the power of God.

Using knowledge and resources bestowed by God, humankind is not sparing any effort to challenge the supremacy of God in many ways. Technology has equipped humanity with enormous power. Instead of using it for improving the lives of people, the power has captivated their minds with immoral and arrogant behaviour.

God says in another part for the Quran:

“Alif Lam Ra: This is a Scripture, which we have revealed unto thee (Muhammad), that thou mayest bring forth mankind from darkness unto their Lord, unto the path of the Mighty, the Owner of Praise.”

Mankind! We created you from a male and female, and made you into peoples and tribes so that you might come to know each other. The noblest among you in God’s sight is the one of you who best performs his duty. God is All-Knowing, All-Aware. (49:13)

In this universe there is space for everybody, yet we have not learned to live together. We are not only possessive of our material assets, but even more so of our faith as Jews, Christians, Muslims or Hindus etc. The question I ask today is, “We all belong to God, but who owns God? If the answer is no one, then why has ownership and dissemination of his message resulted in the bloodshed of the past and even now in the present. We believe in a supreme God that alone possess the power of retribution for intransigence to His commands. God has never placed that power in our hands to do the same.

In the Quran God emphatically says that in reference to Israelites:

Today we are seeing gradual erosion of human values. God sees us all as human beings and even though He demands belief and allegiance, yet he has not failed His creation. I am reminded of a story of Prophet Abraham (Peace be on him).

Prophet Abraham was well known for his hospitality. He never liked to eat alone, always share his table with some one. One day there was no one in sight, so he waited for his meal, hoping for some one to show up at his door. At last an old man in his 90s showed up. He invited him to eat. As he set the table, he asked the old man to start in the name of God. The old man replied: “Are you trying to bribe me with food for your God? I don’t believe in your God.” Abraham asked, ‘Who do you worship?’ He said “Fire.”

At once, Prophet Abraham, lifted him off his table and threw him out, saying “Ask your God for food. There is no place for you at my table.” As soon as the old man left, Arch Angel Gabriel descended with a message from Almighty God, saying:

“O Abraham, the God Almighty has nourished this man for 90 years in spite of his disbelief and you could not feed him once? “

Abraham realized his mistake and he immediately stepped out to call him back. The old man heard his cry to return, but he thought that, what now, if the verbal abuse was not enough, maybe he is now going to be physical. So he resisted the call of Abraham. Prophet Abraham begged him to come back and expressed his regrets, asking him to eat in the name of whoever he wishes to take.

The old man now asked him, “Before I take the food, tell me what brought about this change of heart?” He was told that ‘I got the message from my Creator, that, he has been nourishing you for 90 years even though you did not believe in Him nor acknowledged him and I couldn’t feed you just one time.’

Right away the old man suddenly realized that he had been looked after by an Almighty God all these years and he never acknowledged him. He asked that before I start the meal, connect me to your Creator.

This provides a lesson for us all. If God can see every one as His creation, whether they believe in Him or not, who are we to deny a space in this earth to anyone? We, the family of Abraham, are challenged today to understand the Divine Scriptures in their true spirit and context and join hands to connect humanity with the Creator. Are we ready to accept this challenge?

God has made us trustees of this World and we must fulfil that trust. The trust to preserve our faith in Him, the trust to share His message left to us by His Messengers, the trust to protect the environment, the trust to engage in the efforts to improve the quality of life and to help one another in time of prosperity and adversity. And above all the trust to value His creation of which the human being ranks supreme.

If we are to leave a legacy of love and harmony for our coming generations, then we must overcome our differences whatever they may be for working as a family of Abraham, to enhance and promote the word of God in His Kingdom, for our success in this World and in the Hereafter… Ameen

Finally a Prayer for peace written by Inayat Khan, founder of the Sufi Order in the West, was born in Baroda, India, on July 5, 1882:

Send Thy peace O Lord, which is
perfect and everlasting,
that our souls may radiate peace.

Send Thy peace O Lord, that we
may think, act and speak harmoniously.

Send Thy peace O Lord, that we
may be contented and thankful for
Thy bountiful gifts.

Send Thy peace O Lord, that amidst
our worldly strife, we may enjoy Thy bliss.

Send Thy peace O Lord, that we
may endure all, tolerate all, in the thought of
Thy grace and mercy.

Send Thy peace O Lord, that our lives
may become a Divine vision and in Thy light,
all darkness may vanish.

Send Thy peace O Lord, our Father and Mother,
that we Thy children on Earth may all
unite in one family.