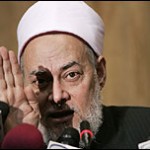 (June 1, 2009) – The Grand Mufti of Egypt, Sheik Ali Gomaa, has issued a ruling stating that Muslims should not use weapons of mass destruction (WMD) as such weapons would violate Islamic teachings as Muslims as well as non-Muslims could be killed.

MENA, the Egyptian state news agency, said that Gomaa issued the ruling (fatwa) as a clarification to reports that the use of such weapons was legitimate.

He called that suggestion “a lie and a fraud”.

The Grand Mufti further went on to say that Muslim countries could acquire such weapons as a deterrent.

As Grand Mufti, he oversees the premier institution in the Muslim world for religious legal direction, Dar al-Ifta al-Misriyyah.

Since his appointment as Grand Mufti, he has become a leading advocate for moderation, and an outspoken critic of extremist ideologies.