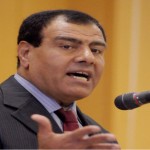 (November 15, 2009) – “Life is like riding a bicycle – in order to keep your balance you must keep moving,” Dr. Izzeldin Abuelaish told a multi-faith audience last night at Toronto’s Temple Sinai about the tragedy that devastated his family.

Dr. Izzeldin Abuelaish is the Gazan physician and proponent of peace between Palestinians and Israelis who gained international attention when he lost three of his daughters and a niece on January 16, 2009 as Israeli tank shells shattered his house in the Jabala camp.

“I lost three daughters, but I have more – five more with a future,” he added in an emotionally charged speech.

“Forgiveness will help you move forward. As a believer of deep faith, [I believe] everything from God is good; what is evil is man-made.”

Educated at Harvard (Masters in Public Health), Dr. Abuelaish currently serves as associate professor at the Dalla Lana School of Public Health at the University of Toronto. He was a nominee for the 2009 Nobel Peace Prize.

The event, organized by Temple Sinai and the Canadian Association of Jews and Muslims (CAJM), was part of the Twinning of Mosques and Synagogues weekend that took place in many cities in North America.

Throughout the weekend, mosques and synagogues participating in the Twinning welcomed their congregations with food, lectures and discussions about their common roots.

“These events help to build and repair the relationship between the Muslim and Jewish communities,” said Barbara Landau, co-chair of the Canadian Association of Jews and Muslims.

The audience of mostly Jews and Muslims were openly moved by Dr. Abuelaish’s message and his strength and open heartedness.

“Religion is about how to deal and respect each other.”

He then advised the attendees to be open hearted in dealing with others.

“To have a better world free of violence, diseases and injustice is to have big and open hearts, minds and eyes. All of us are human beings and all of us are equal.”

Dr. Abuelaish also challenged the audience to go beyond words to action.

“I am more determined to continue my efforts for the sake of humanity, but I also want you to know that willing is not enough – we must act,” he said.

“It is known that all it takes for evil to survive is for good people like you to do nothing. It is time to do and to act.”