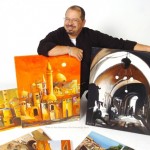 (October 19, 2009) – Dr. Ibrahim Shalaby is a Canadian-Jerusalemite architect and interior designer who says “I don’t live in Jerusalem, it lives in me.”

Internationally, he has had 32 solo exhibitions in 16 countries across the Middle East and Europe since 1976. “It is our shared Mediterranean civilization and heritage that I paint,” says Ibrahim.

The roots of the Shalaby (Celebi) family are from Anatolia, the Turkish peninsula.

Long ago, the Shalaby forefathers settled in Turkey’s fourth largest city, Bursa, the capital of the Bursa Province, south of Istanbul.

Also known as Yesil Bursa (Green Bursa), it is famous for its public parks and gardens.

Ibrahim was born in Amman, Jordan in 1956 as a Palestinian national because his father Zuhdi was born in Jerusalem, Palestine in 1925.

The family moved to Jordan to escape the hardships caused by the Israeli colonization of Palestine in 1948.

Ibrahim’s drawing skills and his readiness to improvise with colours and materials became obvious at an early age.

At 17, he mastered oil painting and was able to copy the works of his favourite giants – Renoir, Cezanne and Van Gogh.

In 1976, he completed his high school education.

His father wanted him to go on to become a medical doctor and pushed him towards higher education in the sciences; however, Ibrahim’s love of art prevailed.

The young painter took charge of his future and pursued his life and aspirations in the arts at his own expense.

By the end of 1976, Ibrahim’s talent had come to the attention of the Hashemite Royal Family of Jordan who sent him to Cairo to study fine arts. Helwan University’s Faculty of Fine Arts in Zamalek immediately determined that Ibrahim’s work exceeded the standards of their graduates.

The dean himself advised Ibrahim to pursue his studies in Architecture and Interior Design. Thus, our young painter was enrolled in the Faculty of Applied Arts.

During his five year stay in Egypt, Ibrahim painted relentlessly.

He held many exhibitions and began selling his works.

In 1981, Ibrahim Shalaby took 1st place of 176 students and became the first non-Egyptian Arab student to graduate Helwan University with honours since the school’s establishment!

Ibrahim’s first serious job was as Interior Design Architect for the Sigma Company of Amman.

Shortly thereafter, in 1982, he joined Yarmouk University in Irbid, Jordan as a lecturer and was instrumental in helping set the syllabus of the Interior Design Faculty.

In 1986, he moved on to teach Interior Design at Kuwait University.

Outside the classroom, Ibrahim was applying his industrial design skills and managing several factories in the Gulf States.

In 1988, he was awarded a Masters Degree in Interior Architecture from the Royal College of Art, London, UK. In 1991, he returned to Jordan, to Jabal, and embarked on his independent career in the field of arts and interior design. Opening his own private office – his first headquarters.

Ibrahim continues his non-stop international participation in art workshops, conferences, exhibitions, and gallery shows throughout the Middle East and Europe.

It is worth mentioning that his works have been purchased or commissioned by dignitaries such as the late King Hussein of Jordan and members of the Royal Jordanian Family, King Albert II of Belgium, Roman Herzog of Germany and Vali Ihsan Dede of Konya, Turkey to name just a few.

His paintings hang in the Museums of Fine Arts in Amman and Damascus, in addition to many ministries, banks, offices and homes of government officials and secular celebrities.

Ibrahim Shalaby and his family immigrated to Canada in January 2002.

In the past five years, Ibrahim has painted and exhibited continuously, and was awarded an honorary Doctorate of Fine Arts from Glendale University in the U.S.

He is currently involved with 35 local, provincial and national Islamic Societies and Organizations.

He supports the Abstract Art Movement of the Turkish and Arab Congregations in Canada as the president of the Canadian Arab Organization of Culture and Arts.