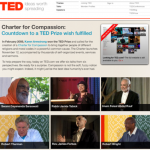 (November 1, 2009) – Today, TED.com released six short talks on compassion from six different perspectives — from a Rabbi, an Imam, a Reverend, a Tenzin, a Swami and a secular voice of compassion.

These short talks are being presented prior to the launch of the Charter for Compassion on November 12.

“We hope these talks inspire you so that in the week following the launch, thousands of services on the nature of compassion will be preached all over the world … thousands of discussions will be held around dinner tables … thousands of ideas will be shared,” according to a release from TED.com and charterforcompassion.org

In February 2008, British religious scholar, Karen Armstrong, won the TED Prize and called for the creation of a Charter for Compassion to bring together people of different religions and moral codes in a powerful common cause.

The Charter launches November 12, accompanied by thousands of self-organized events, services and sermons.

In the short talks, the six speakers bear witness to the fact that compassion and the Golden Rule lie at the heart of all religion and all morality.

“Be ready for a surprise. Compassion is not the soft, fuzzy notion you might expect. Indeed, it might just be the best idea humanity’s ever had,” TED.com said.

“Our work is only just beginning. After the launch on November 12, we begin the challenging task of translating the Charter for Compassion into practical action to heal our torn world. That requires each one of us to meditate deeply on the meaning and challenge of compassion and make it central to our own lives. These six speakers will give us food for thought as ~ together ~ we embark on our endeavour to create a more compassionate world.”

To view short talks go to: www.ted.com or www.charterforcompassion.org