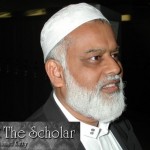 (December 18, 2009) – A well-known Canadian Imam and Scholar has launched an online resource providing users with access to his fatwas (Islamic rulings) and the ability to submit their questions on various issues.

Shaikh Ahmad Kutty will answer questions through his web site, askthescholar.com, which also includes his sermons, lectures and writings.

Shaikh Kutty has served the Toronto Muslim Community for three decades as a scholar and Imam and is one of the most respected religious leaders in Canada’s Muslim community.

Currently, he is a resident scholar and senior lecturer at the Islamic Institute of Toronto where he teaches courses in the Islamic sciences.

Shaikh Kutty’s reasoned fatwas reflects his ability to understand the complex issues of modern society and the context in which Western Muslims live.

His rulings have garnered international recognition and have been translated into several languages and appear on various international sites including islamonline.net, islamicity.com, islamophile.org, infad.usim.edu.my, and islam.ca.

Shaikh Ahmad Kutty was educated in the traditional Islamic Sciences at Islamiyya College, Kerala, and at the Islamic University of Madina Munawwarah. He received his ijazahs (licences/designations) as an ‘a’lim and faqih from both India and Saudi Arabia. He earned his M.A from the University of Toronto and pursued doctoral studies at McGill University, Montreal.