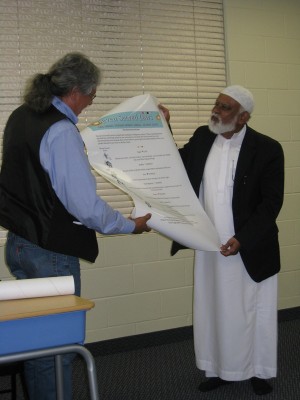 (June 23, 2009) – One of Canada’s First Nations Elders and spiritual leaders, Dave Courchene Jr from the Anishnabe Nation, Eagle Clan, met with Imams and Muslim leaders in Toronto last Friday seeking to establish a relationship with Canada’s Muslims and to work for restoring sacredness in people’s lives.

“I believe that the biggest challenge that we have today is to understand the significance and importance of that spiritual reality that exists whether we accept or deny it in our lives,” Courchene told Muslim leaders.

“Spiritual people must be at the forefront to bring back sacredness in today’s world,” he added.

Dave Courchene Jr. is the visionary behind The Turtle Lodge, the First Nation’s Center for Learning and Healing in Sagkeeng, Manitoba, Canada.

Through the teachings of elders from across Canada that began more than 20 years ago, Courchene promotes traditional ways to health and well-being.

His knowledge of First Nations spiritual teachings has led him to travel around the world, including to the Middle East, Japan, the Philippines and South Korea.

In addition to briefing Muslim leaders about the First Nations spiritual beliefs, Courchene spoke extensively about their relationship to the Earth and the urgency for humanity to address the environmental crisis.

“I pray that this will be the first step on the path towards mutual sharing, honoring, and solidarity between our Muslim communities and the First Nations of the Americas,” said Dawood Zwink, a community development worker with Scouts Canada.

“I hope that Muslims will grow to a better understanding and make a deeper contribution towards the urgently needed healing of the Earth,” Zwink added.

The Muslim leaders also pledged to support a day of fasting on October 10, 2009, (A Celebration of Giving) that was launched by the First Nations and the food bank in Winnipeg, Manitoba.

Dave Courchene said the initiative would encourage people to fast for one day, and to give themselves in service to others or the Earth in some way.

“By fasting, we are celebrating the value of giving, by not taking from the Earth for one day,” he said.

Those fasting are being encouraged to get sponsored to fast for the valued amount of food not being eaten that day, with all proceeds or food being donated to food bank.

Courchene also addressed a number of public sessions with the Muslim community in Toronto.

At a lecture to Muslims at the Islamic Institute of Toronto, he told the audience that the First Nations people share some similarities with Muslims.

“The rest of society has put labels on Muslims,” he said. “We have also been labeled the same way.”

He outlined the Native belief about a time that would come when the earth would enter into a change ushering in a new life that would prevent the destruction of the planet.

“The new life will be represented by many different cultures and somehow they would gather to share the uniqueness of each of their strengths and give teachings and knowledge that they have gathered from their cultures,” Courchene said.

Shaikh Ahmad Kutty, Senior Lecturer at the Islamic Institute of Toronto and a regular scholar with IslamOnline Live Fatwa session, commented that the core principles of native spirituality presented by David Courchene Jr, have similarities with some Islamic beliefs and resonated with him.

“You have spoken from your heart and you have touched our hearts,” Shaikh Ahmad Kutty said in thanking David Courchene for coming out to meet Muslims. 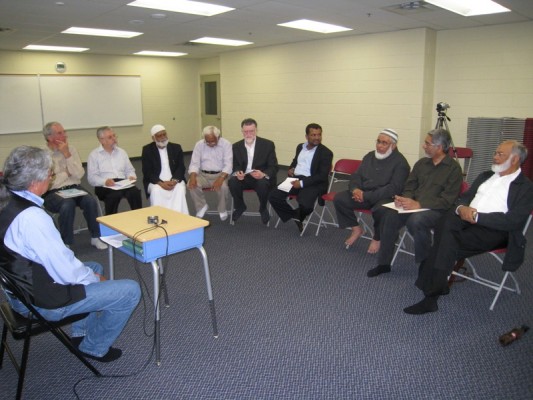