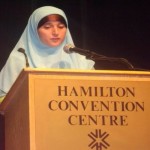 (November 17, 2009) – Canadian Muslims need to be more proactive when it comes to supporting other Canadians who are detained overseas, according Dr. Monia Mazigh.

Mazigh, the wife of Maher Arar, was a keynote speaker at the Inspired and Engaged Citizens: Canadian Muslim Conference held over the weekend in Hamilton, Ontario.

“A few individuals who were brave came forward,” she said about the Muslim community’s reaction to her husband’s situation. “After 9/11 organizations were so afraid.”

Monia Mazigh fought relentlessly for the release of her husband after he was accused of being a terrorist by the United States and sent to Syria where he was tortured and held without charge for over a year before being returned to Canada.

“After Maher Arar came back, more people started to speak out,” she added.

She thinks this is not enough and Canadian Muslims should have been more outspoken.

The day-long conference featured an all-female panel of speakers and drew over 500 delegates from Hamilton and the Greater Toronto Area.

Sessions dealt with the importance of civic engagement, interfaith relations and dialogue, the education system and youth identity.

Dr. Mazigh also advised the community and mosques to ask themselves some tough questions in the case of the young people in the Toronto 18 terror case.

“In the mosques, did they fail these kids?” she said. ‘There is a lot of lack of leadership.”

“Offer young people alternatives – to think, read, and open their minds,” she added.

Another keynote speaker was Zarqa Nawaz, the creator and executive producer of the CBC show Little Mosque on the Prairie.

Prominently featured at the conference was a large Wall of Compassion that celebrated the world-wide launch of the Charter for Compassion on November 12.

The Charter which seeks to restore the message of the Golden Rule – do unto others as you would have them do unto you – was created collaboratively by people around the globe via the Internet and then refined by a team of religious leaders and thinkers from all faiths.

Conference attendees were invited to affirm their support of the Charter by signing the Wall of Compassion.