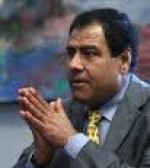 (December 16, 2009) – Dr Izzeldin Abuelaish, the Palestinian doctor and peace activist, whose personal tragedy transfixed the world during the Gaza war earlier this year, will be the guest of honor on Saturday at an Eid ul-Adha dinner at the North American Muslim Foundation (NAMF) in Scarborough.

On Jan. 16, just two days before the end of the Gaza conflict, Israeli tank shells killed three of Abuelaish’s eight children and a niece, all aged 20 or younger. The shells also badly injured another daughter.

Despite these unbelievable circumstances, Dr. Abuelaish continues to campaign for peace and will bring his message to Toronto’s Muslims on Saturday evening.

The Harvard-educated obstetric gynecologist commuted weekly from Gaza to Tel Aviv to deliver both Israeli and Palestinian babies in one of the country’s most prestigious hospitals.

He was well-known for many years among both Palestinians and Israelis as the passionate, peace-preaching doctor who crossed Gaza’s checkpoints

Habeeb Alli, NAMF spokesperson, said Abuelaish, who was nominated for the Nobel Peace Prize, embodies the spirit of forgiveness and mercy which are the lessons taught during Eid ul-Adha, a yearly commemoration of Prophet Abraham’s willingness to sacrifice his son to obey God’s will.

Admission to the 5 p.m. dinner Saturday is $20. North American Muslim Foundation is located at 4140 Finch Ave., between Kennedy Road and Midland Avenue