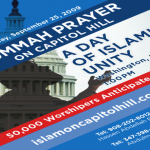 (September 10, 2009) – American Muslims are being invited to attend a National Jummah prayer service on U.S. Capitol Hill on September 25, 2009.

Billed as a ‘Day of Unity’, the event is being called ‘Islam on Capitol Hill’ and is the idea of Hassen Abdellah, President of the Dar-ul-Islam mosque in Elizabeth, N.J.

”Most of the time, when Muslims go to Washington, D.C., they go there to protest some type of event,” Abdellah told the Washington Post.

“This is not a protest. Never has the Islamic community prayed on Capitol Hill for the soul of America. We’re Americans. We need to change the face of Islam so people don’t feel every Muslim believes America is ‘the great Satan,’ because we love America.”

50,000 people from across the U.S are expected to attend the event.

According to the organizer’s web site,” The objective of this gathering is to invite the Muslim Communities and friends of Islam to express and illustrate the wonderful diversity of Islam. We intend to inspire a new generation of Muslim to work for the greater good of all people.”

Hassen Abdellah said President Obama’s inaugural address in January and his speech in Egypt in June led him and Imam Abdul Malik to begin discussing the idea of holding a Friday prayer service on Capitol Hill.

The prayer service will occur near where U.S. Presidents have been inaugurated since 1981.

The world famous Qur’an reciter, Sheikh Muhammad Jebril from Egypt, is expected to attend and recite the Qur’an.

To learn more about the event visit: http://islamoncapitolhill.com