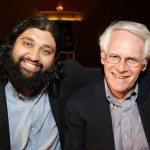 Alper, who performs internationally with Muslim comedians has been doing stand-up for 23 years.

“I was thrilled to receive the invitation to appear at MuslimFest,” says Alper

“During the past seven years I’ve seen repeatedly how shared laughter diffuses suspicion and builds bridges between formerly unconnected communities.”

“We try to work with Canada’s rich diversity to foster an understanding of each other’s culture and identity; having Rabbi Bob Alper perform will further develop this,” says Amer Meknas, director of MuslimFest.

The festival aims to highlight Muslim arts and culture, celebrate diversity, and build lasting relationships with other groups – and has won multiple awards for its effective pioneer efforts.

MuslimFest will take place at the Living Arts Centre in Mississauga, Ontario, during the Civic Holiday Weekend, August 1st and 2nd, 2009.

For further information on the festival www.muslimfest.com